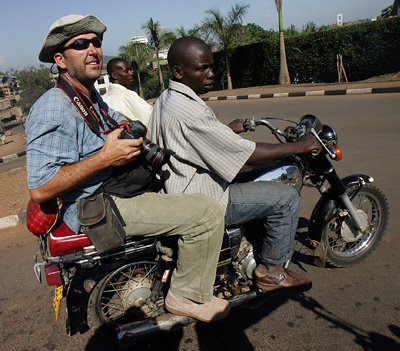 Karel Prinsloo is an award winning photographer who has been working mainly in Africa for almost thirty years. He has covered for most part conflicts and humanitarian work in Africa and the Middle East and has been based in Nairobi for nearly a decade as the Associated Press's Chief photographer for East Africa. He also worked at the Associated Press's base in London as a picture editor for Europe, Africa and the Middle East.Currently he is a freelance photographer working for various NGO's like UNICEF, WFP, GAVI,IFAW as well as for major international news media from his base in Paris, France.

Karel has won numerous awards including the South African Photographer Of The Year as well as the second price news stories of the World Press Photo Awards in 2000 for his coverage of the devastating Mozambique floods. He has been a CNN African Journalist of the year photography runner up.

He has been published in all the world's major publications including the New York Times, Time magazine, Newsweek, Paris Match among a few.

Karel is available for assignments and can be CONTACTED at karelprinsloo@yahoo.com

This webpage is dedicated to the memory of our friend Anton Hammerl who was killed on April 5, 2011 in Libya. He was one of a kind.